Houston, TX- The Council for the Society for Underwater Technology (SUT) in London, has agreed to confer Fellowship of SUT upon Mr. Andrew Haigh. The new Fellows will be presented tonight at London’s Trinity House.

Haigh, an Offshore Site Investigation and Geotechnics (OSIG) committee member for the SUT Houston Branch and the chairman of the school-touring committee, is honored by the recognition.

According to Dr. Zenon Medina-Cetina, President of SUT Houston, "Fellowship is one of the highest recognitions that SUT grants to its members, is has to be vetted by the SUT Council. Each branch can nominate members because of professional commitment, leadership, in this case, outreach efforts on behalf of SUT."

Last year, Haigh was awarded the SUT Global Achievement award for 2015 for leading OSIG’s school-touring outreach program in the greater Houston area. Haigh has led the program for the past few years and has committed a significant amount of his time in order for the school touring to prove successful.

Medina-Cetina was thrilled about the news and emphasized the impact that Haigh’s Fellowship will have on the SUT Houston community.

"I think Andrew is the stereotype of the ideal member for SUT. He is the poster child of SUT in terms of outreach and his humble approach, his enthusiasm to bring underwater technology to students."

Medina-Cetina also detailed Haigh’s background with SUT-OSIG and the school-touring program, which originally began when Haigh was volunteering his own time to speak to students about science and different career paths within the industry. This eventually evolved into Haigh leading the OSIG School Touring Outreach Program, which has continued to expand, with an outreach to over 6,000 students in the Houston area in 2015.

"He has great merit in extrapolating something that was very personal to him as a volunteer to support his kid’s school programs, and now converting that into an outreach program for SUT." Medina-Cetina stated.

"I think this is the first time that we have an outreach volunteer nominated for this recognition. So I’m very, very happy that the nomination was successful!"

New Fellows will be presented with a certificate and tie at 6pm (18.00) this evening, at SUT’s Annual General Meeting, held at the Trinity House in London. 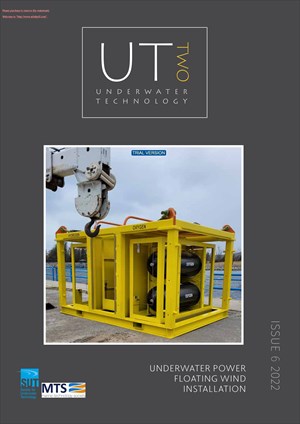